The garden at Blackland House, Calne, Wiltshire — the home of Mr and Mrs Ed Nicholson — is famous for its spring bulbs, but really comes into its own in autumn with its crisp underpinning of geometric forms, says Mary Keen. Photographs by Britt Willoughby Dyer for Country Life.

Blackland House in Wiltshire is where Polly Nicholson established Bayntun Flowers and where she keeps the National Collection of English Florists’ and Dutch historic tulips dating from the early 17th century. Visiting the garden in spring, I had witnessed a panoply of tulipomania under blossoming trees. There were tulips growing everywhere — in pots and tubs or colouring flowerbeds where, later, roses or perennials would flourish. Many more tulips had been planted in grass and the most cosseted historic rarities were lined out in rows, or arranged in vases on the long loggia table.

It was hard not to think that, after this celebration of bulbs, the garden would become less interesting. (When the tulips flower, they are so eye-catching that the bones of the garden are less apparent.) Mrs Nicholson loves the exuberance and freshness of spring and says that she often finds the summer months less than thrilling, but the truth is that the garden comes into its own in autumn, with an entirely different focus. 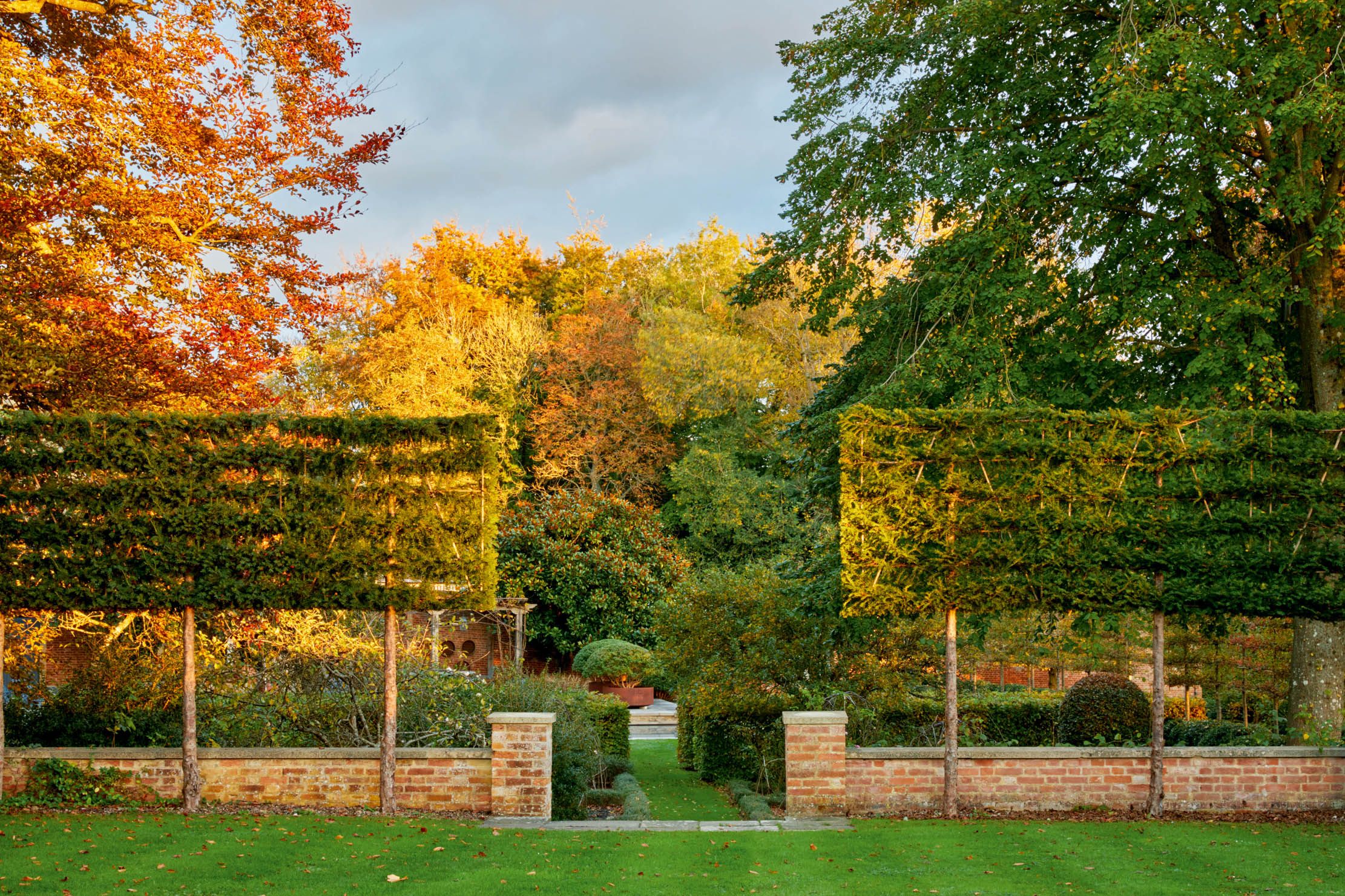 The late-Georgian house enjoys a beautiful setting next to the tiny 13th-century church of St Peter. The Wiltshire Downs surround the park and the River Marden, which runs through the garden, has a bubbling cascade, with the relic of a grotto nearby. It made me wonder if the 18th-century father-and-son grotto- and cascade-makers, Joseph and Josiah Lane, who worked at Bowood, a few miles away, might have been involved. The dark alluvial soil, which is the reason for the name Blackland, is a gardener’s dream. It’s an utterly poetic place, where the late Candida Lycett Green, John Betjeman’s daughter, once lived. Yet, when the Nicholsons bought Blackland House 16 years ago, there was much to be done, inside and outside.

Born Bayntun-Coward, Mrs Nicholson comes from a line of antiquarian booksellers and, after working at Sotheby’s, she completed a course at the English Gardening School in the Chelsea Physic Garden. When she and her husband, Ed, moved out of London, she knew that she wanted to grow masses of flowers, including her favourite historic bulbs, in the garden of their new property. But the empty borders and lack of structure they inherited felt daunting, so she sought help from Arne Maynard, who created formal allées and curving lines of espaliered crab apples, with plenty of topiary everywhere. 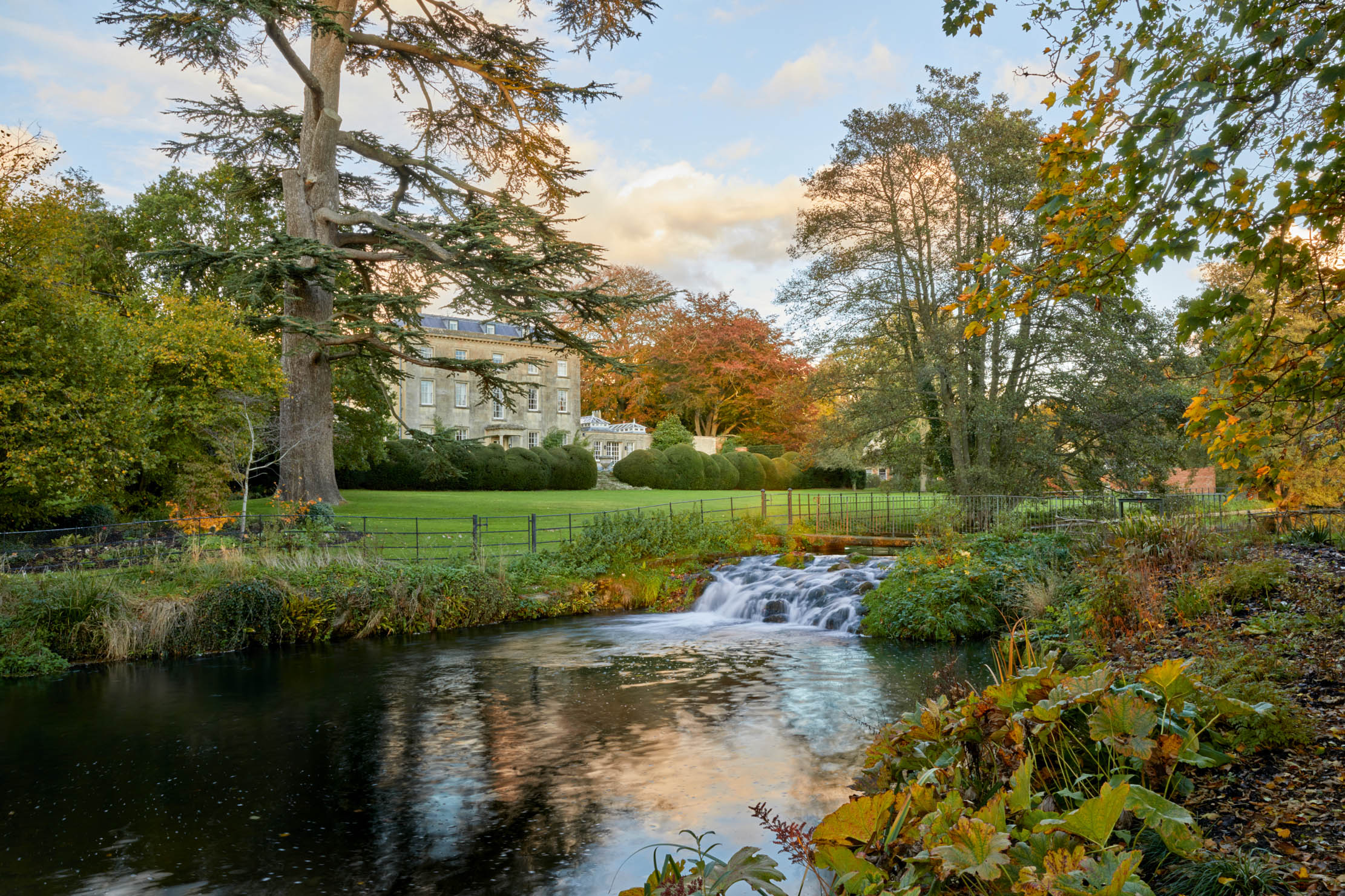 The River Marden bubbles over a cascade. Behind stands the late-Georgian Blackland House. ©Britt Willoughby Dyer for Country Life

The tone of restrained elegance that prevails throughout the garden — the underpinning of all that spring exuberance — first greets the visitor at the gravel sweep in front of the north-facing façade. This is surrounded by clipped yews in various shapes and sizes and includes some existing trees on the edge of the churchyard.

These were drastically pruned and reduced, so the church is now  glimpsed between shapely domes of evergreen. Clusters of smaller balls are grouped around the area, with a few strategically placed lime pollards. Opposite the front door is a rectangular block of copper beech, which visually links to an allée of pleached trees beyond. These were repurposed from one of Mr Maynard’s Chelsea show gardens and, in autumn, their leaves turn into burnished flames. 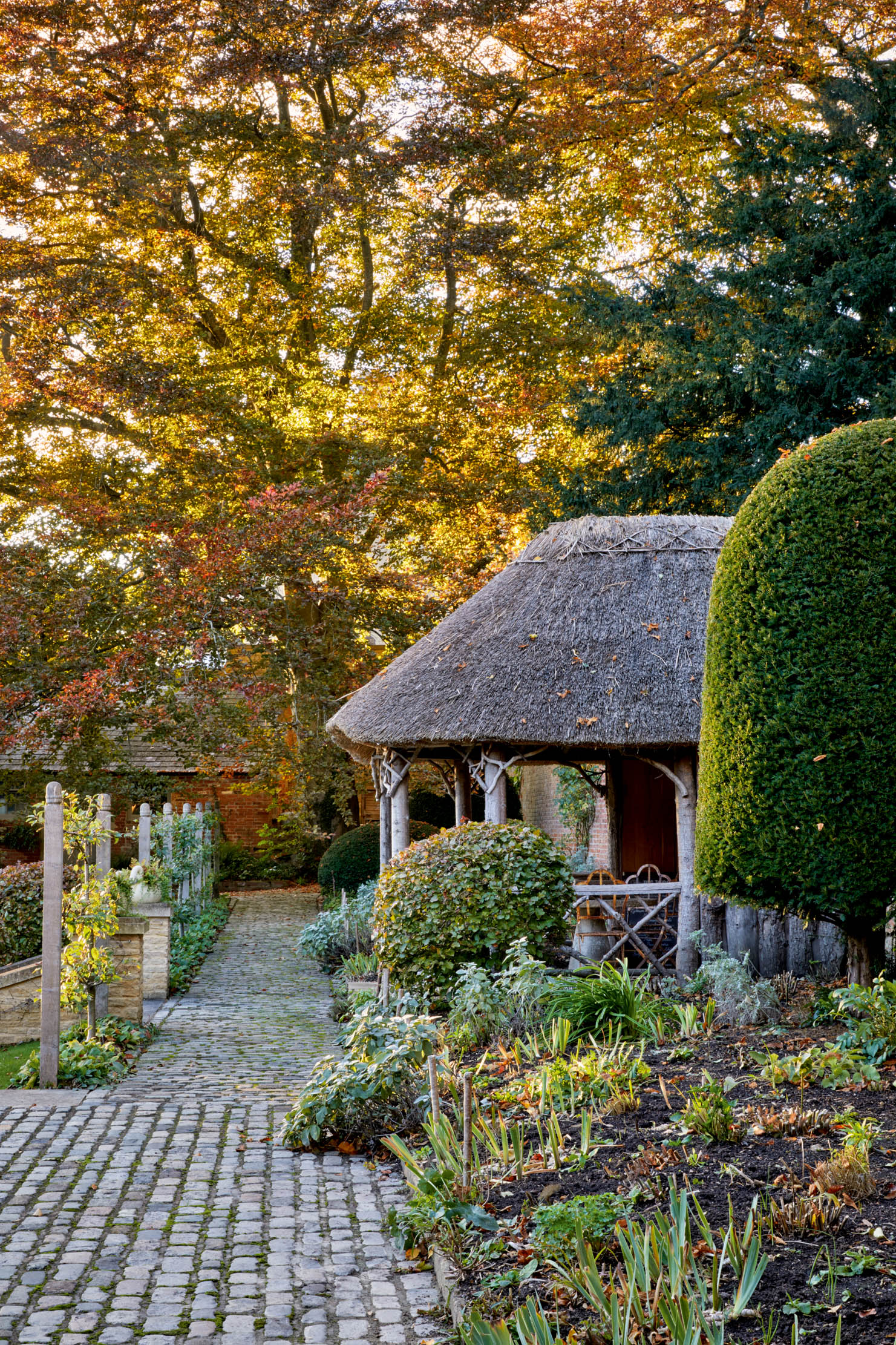 To the south of the building, an existing sharp-angled yew hedge on the lawn, between the house and the river, was cloud-pruned into billows, to echo the curves of the land and to allow views out to the downs. Mrs Nicholson loves to soften the edges of the architecture and the framework of the garden, just as she might do in her flower arrangements, in which she often includes a trailing stem or a wayward flower. She likes to see the symmetry gently disturbed, so seedlings are allowed to grow in the gravel sweep and, on the steps of the house, there is a tumble of Mexican daisies (Erigeron karvinskianus). 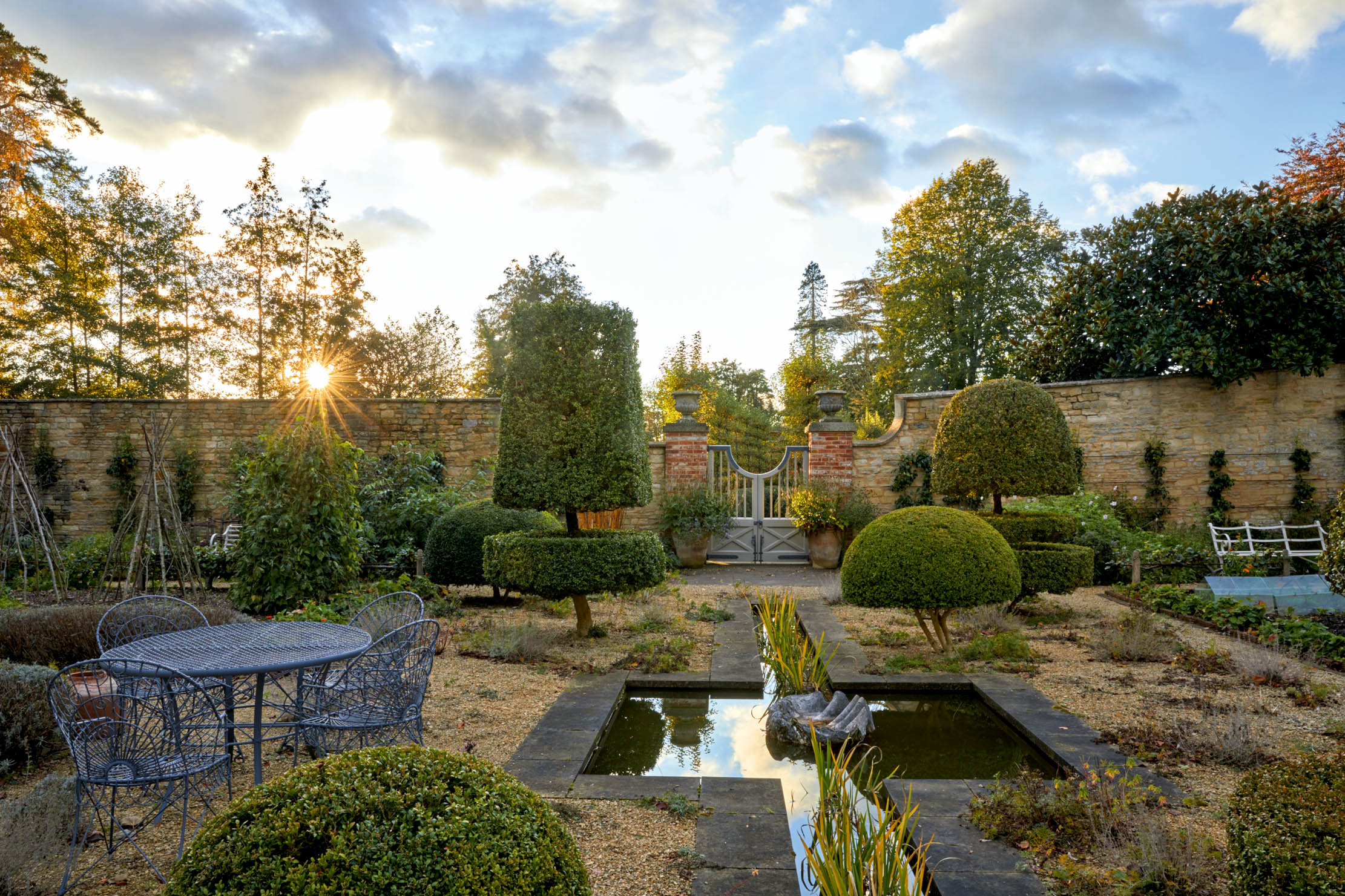 The rill at the heart of the productive walled garden, designed by Arne Maynard. ©Britt Willoughby Dyer for Country Life

Respecting the architecture and a strong framework is key, however. A good example of the synergy between stonework and greenery is an unusual display of espaliered yews at right angles to the house, which seems to echo the three bands of vertical detailing in the stonework above the porch. There are generously planted borders with tall and airy plants, a legacy of the brilliant Hannah Gardner, who was head gardener at Black-land for nine years, until she left last spring to become a freelance horticulturist.

At this time of year, plants are allowed to go to seed in tousled contrast to the crisp lines everywhere else. The garden has Soil Association organic status and seedheads are as valuable to birds as the bright apples on the Malus ‘Evereste’ trees. The Nicholsons are dedicated to living sustainably and can claim to be almost self-sufficient. 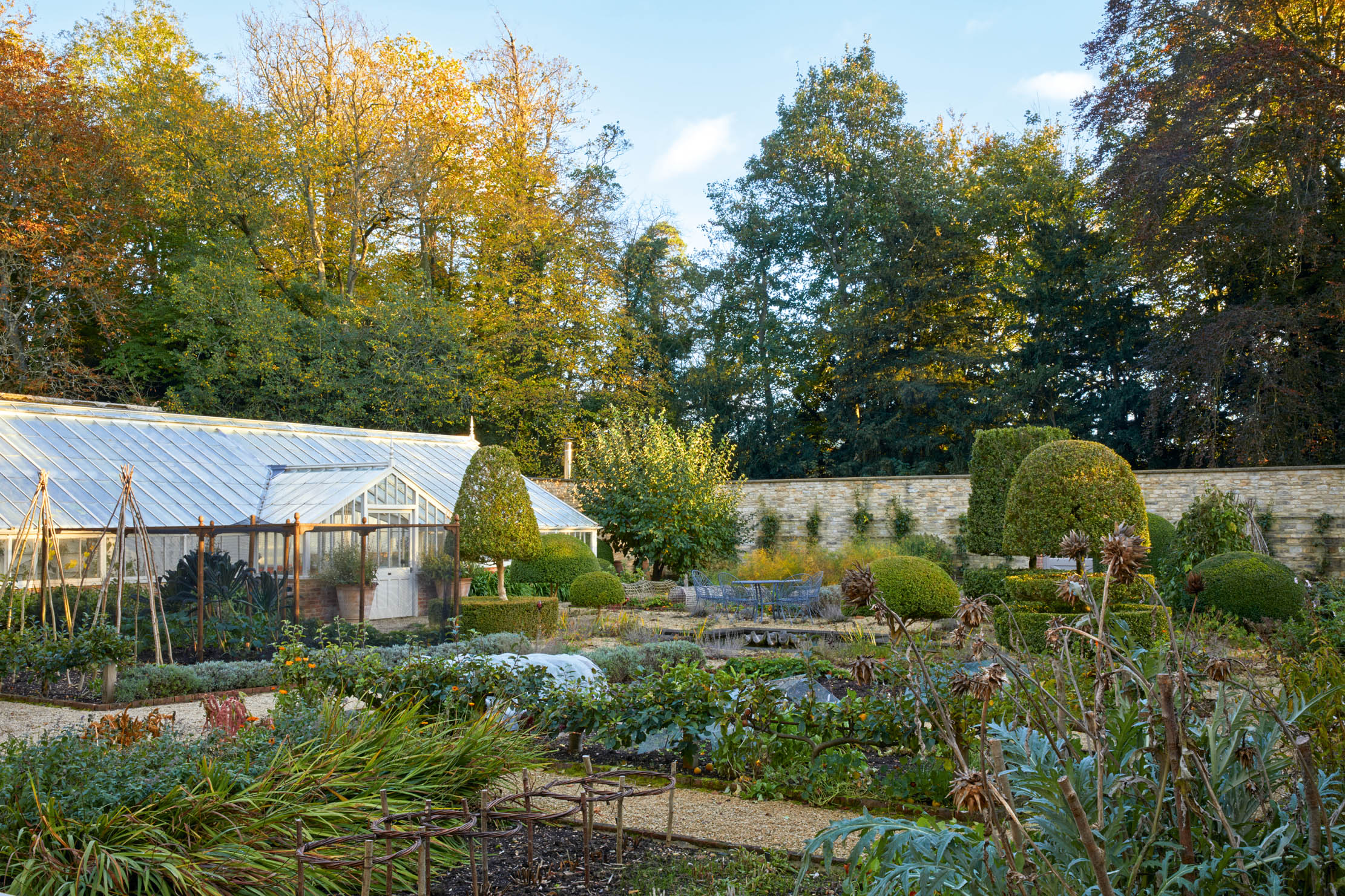 Autumn is the high point of the productive walled garden, which was designed by Mr Maynard. In it, a central rill is surrounded by several rectangular plats for growing fruit, vegetables and flowers. Some of the beds are edged with stepover apple trees, bearing more fruit than I ever thought possible. Huge ‘Crown Prince’ squashes loll in the beds and there are salads and spinach to pick, among cosmos and marigolds. Mrs Nicholson likes edible flowers and scatters the petals of nasturtiums and marigolds over her salads. In the beds are interesting handmade structures — wicker cloches, woven willow stakes and traditional bean poles — that add height and variety, made by woodsman Andrew Kirby. There are a few random topiary pieces and a large quince tree dominates one corner.

In the wide gravel paths, Anemone pulsatillas linger as downy seedheads, as their grander relations, the outsize Galilee anemones, are grown in a row of old-fashioned frames. Along one side of the walled garden, which is pollinated by Blackland bees, stands a beautiful Foster & Pearson glasshouse. A circle of windfalls is arranged around a pot containing airy Nicotiana ‘Bronze Queen’, one of the little decorative touches that are a sign of daily and loving care from its owner, who has recently been more involved than ever. 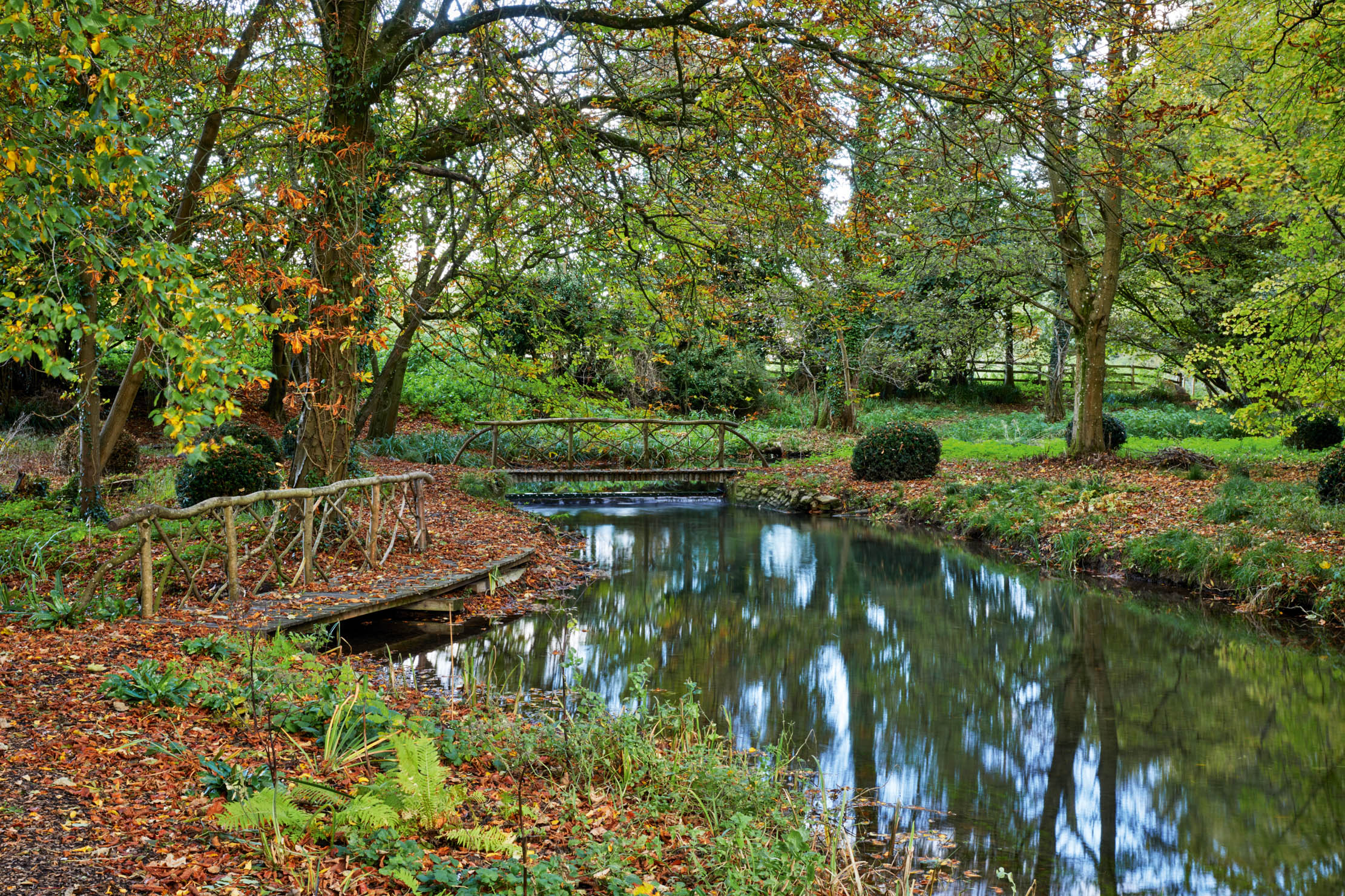 After Miss Gardner left this spring, Mrs Nicholson ran the garden until her new head gardener, Andy Wilson, arrived in August, fresh from Kew. Her regular team includes the freelance Ed Heard, who is responsible for the trim and tidy topiary and, with the rest of the immaculate presentation, there is help from two part-time gardeners, Tom (Berni) Warner and Penny Philip. 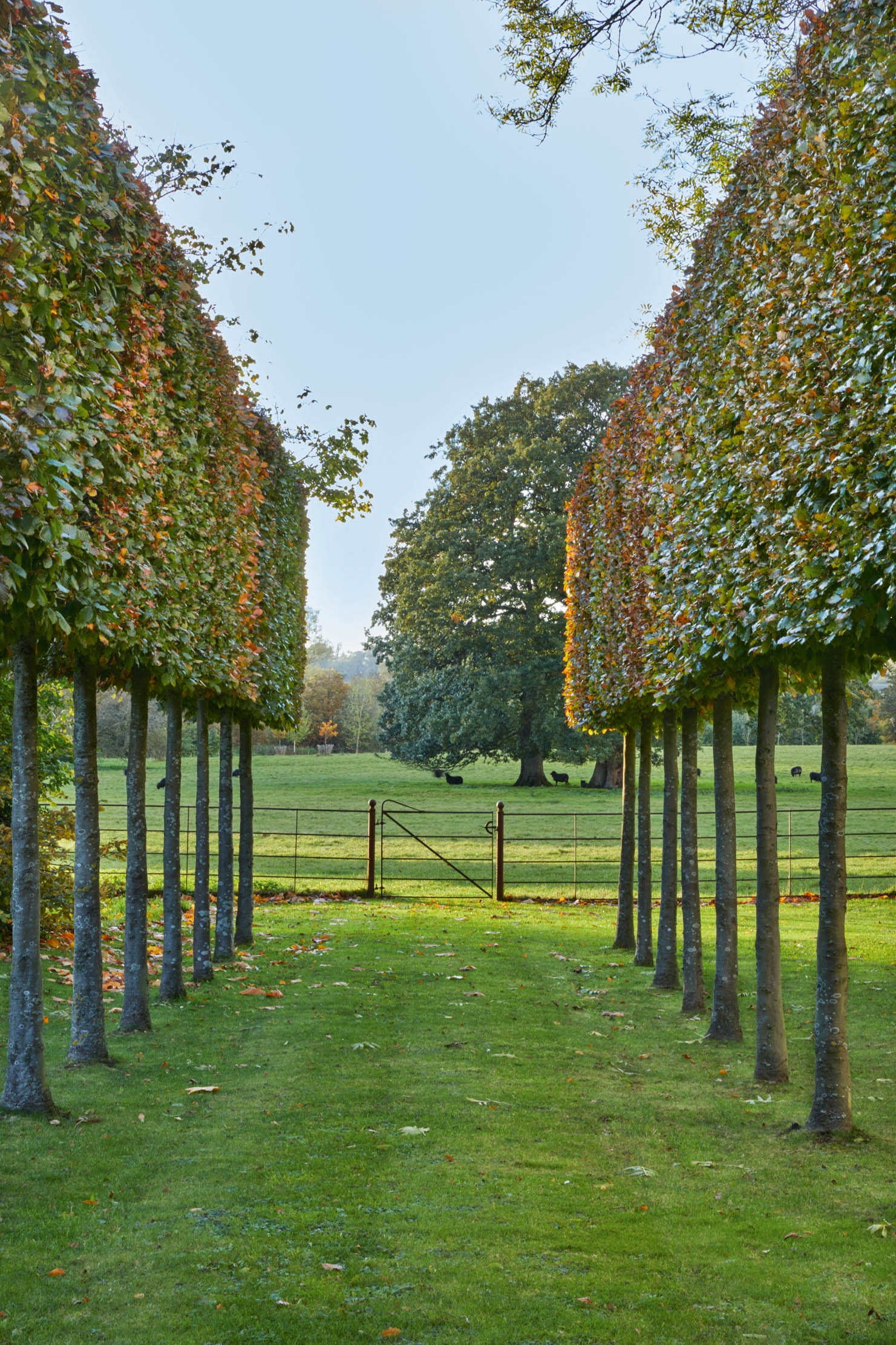 Leading the eye into the parkland, grazed by Hebridean sheep, is an avenue of pleached copper beech. ©Britt Willoughby Dyer for Country Life

It’s a remarkable achievement when you realise the dedication that must also be needed to manage the cutting plots away from the main garden, where several top florists, including Shane Connolly, find treasures for their arrangements. There is a whole new area of wilder planting around the river, as well as plans for restoring the grotto and adding a summer house to the south of the house. If setting such high standards everywhere at Blackland was not enough, the exemplary Mrs Nicholson is writing a scholarly book on her favourite topic — tulips.

Visit www.bayntunflowers.co.uk to find out more about the garden and Polly Nicholson’s collection.

The garden at Blackland House: A tulip-filled sanctuary that shines as bright in Autumn as it does in Spring